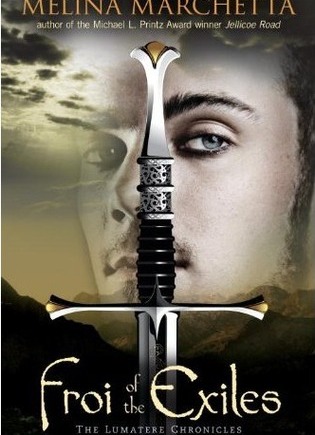 This review may include spoilers

I know most people hate Froi from ‘Finnikin of the Rock’, but in the context of the story I thought the character’s actions made sense. If you evaluate a person and their upbringing and the kind of world they live in, it can help you to understand why they behave the way they do.

I don’t excuse what he does, I do think he needs psychological help.

Froi is different in this book. At first I thought he would speak in broken English (which I was looking forward to because it’s so cute), like he did in the first one (even though he hardly spoke). But no, he’s older and smarter and he’s trying to become someone who can be respected by the people he respects.

Quintana (his love interest) is hilarious. I love that she’s not described as ‘pretty’ or ‘beautiful’ or even clean, but Froi loves her the way she is.

It’s probably the first time I’ve read about a character who doesn’t ever wash themselves. And this is explained. Quintana is troubled and has been mistreated her entire life. She’s quite fragile and very strange.
They are very unique characters; Froi and Quintana.

Melina Marchetta is another author I’ve learned that can write very real characters. On top of that, her characters aren’t very likable and are very flawed but in the end you can’t help but like them.

Phaedra was that for me. I didn’t think much of her at first but then she really proves herself. I felt sorry for her, the more I got to learn about her.
Isaboe took a turn. I loved her in the first book but omg she’s so annoying, I really didn’t like her.

This book was much better than the first and I loved the first book. Everything makes so much sense. THIS IS AMAZING!
I understand this review doesn’t make much sense. It’s a terrible review for such a great book. If I was rating books, I’d give it a 5/5.

Thanks for reading and I hope you’re having a great day.