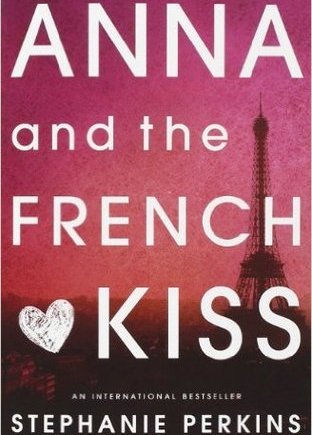 This review does include spoilers

Synopsis:
Anna is less than thrilled to be shipped off to boarding school in Paris, leaving a fledgling romance behind – until she meets Étienne St. Clair. Smart, charming, beautiful, Étienne has it all…including a girlfriend. But in the City of Light, wishes have a way of coming true. Will a year of romantic near-misses end with a longed-for French kiss?

What surprised me is how much I enjoyed this book. It’s far better than I expected it to be. It was cute and serious and not a typical teen read.

This book has a ton of praises, which is why I thought to read it. I thought it would be a cute, fluffy read but it was more than that. I didn’t expect heart breaking/serious moments the characters had to deal with. This made the characters real to me.
I loved the description of Paris Stephanie Perkins writes and it once again revived my dreams of exploring Paris for myself.

This book starts off with Anna being sent to Paris. She’s finally pleased with how her life is going in Atlanta and doesn’t want to leave. Even though Paris is a city most people would love to visit. I think Anna conveyed some real concerns about why she didn’t want to go.
Many places of the world have been glamorised by books and movies, but in this book Stephanie Perkins doesn’t start off by talking about how great Paris might be.

Anna doesn’t like being there, she’s alone in a new country, far away from her family and friends and has no choice in this matter. She’s afraid to step outside of her dorm room and explore Paris. She prefers to stay inside where she feels comfortable. I understand what it is like to feel distressed in a new environment and how I would rather choose to feel secure and relaxed than to go outside of my comfort zone.
In that sense, I could relate to the type of person Anna is.
There were parts of the book that were unfavourable of Etienne St. Clair, the love interest of Anna. He has a girlfriend, who he was supposedly in love with, but when he meets Anna, everything between him and his girlfriend changes. No love triangle formulates, but I think there was a lot of emotional cheating going on.

My concern was what if that happens to him again, because he ends up with Anna. At first I thought that maybe St. Clair was having problems in his relationship and that’s why when he met Anna, it got worse. But no, the problems started when he met Anna.
I thought less of him after that and its probably why I wasn’t swooning over this guy (which I rarely ever do anyway).
Another thing was his British accent. Maybe it’s because I’m British, but I find it hard to see a British person more attractive than any other person in the world. The British character trend is pretty annoying. It doesn’t make a person automatically attractive. I prefer it if writers show the characters personality.
Stephanie Perkins does actually show what type of person Etienne St. Clair is and eventually I did think he was alright.
To conclude, this is a cute, funny and serious book. I was invested in the character’s lives and the story has stuck with me. I’m waiting to forget what happens in the book so that I can read it again. I’m glad to have read this.
Feel free to leave a comment below and let me know what you thought of the review or the book.
Thanks for reading 🙂